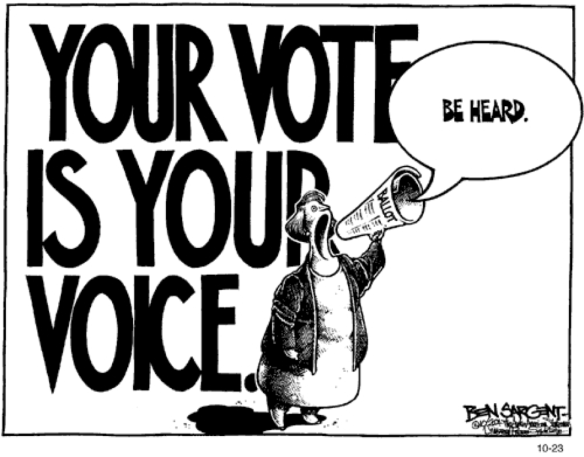 I have been looking at Christian leaders for input on the upcoming elections and I have found a consistent theme. From Bill Bright, the founder of Campus Crusade for Christ, to Pope Francis their advice has been to pray, to study and to vote. Please allow me to add some priestly commentary.

PRAY. While we certainly do want God to bless our nation, the theme of prayers in the Scriptures concerning nations is more often prayers of repentance. The more famous one is from 2 Chronicles. “If my people, who are called by my name, will humble themselves and pray and seek my face and turn from their wicked ways, then I will hear from heaven, and I will forgive their sin and will heal their land.” (7:14). There are many sins for which our nation is guilty and if God’s people do not repent on behalf of their nation who will? Second we need to pray for God to raise up godly leaders. St. Paul says that is a priority. “First of all, then, I urge that supplications, prayers, intercessions and thanksgivings be made for all people, for kings and all who are in high positions, that we may lead a peaceful and quiet life….” (1 Tim 2:1). Third we should pray that our government remains within its God given parameters. Romans 13 says that governing authorities are servants of God but we must be careful not to allow them to attempt to replace God. Our rights and freedoms are given to us by God and not by the government. Therefore any government that seeks to limit our rights and freedoms is no longer serving God. To put it crassly, the chief role of the government is national security not telling it citizens how large of a Slurpee we are allowed to have. My momma lives in Orlando, not Washington D.C.

STUDY. As an instant society we are too swayed by sound bites and slogans and commercials. Experience tells us that candidates will tell us what they think that we want to hear in order to be elected. So we need to dig deeper. It is helpful to get beyond the personalities and investigate the platforms upon which the candidates are standing. The platforms of both major parties and of the independents are easily found using Google. Given the power of the American Presidency and its influence around the world it is worth some of our time to do some investigation.

VOTE. But may I add to vote your conscience. As Christians we should move beyond our personal interests and seek what it right and true and good. “Let each of you look not only to his own interests, but also to the interests of others.” Phil 2:4. So while I would like to pay less taxes that won’t be my determining factor if it means voting for someone who would oppress others. We also must give freedom to others that voting their conscience may mean for them that their conscience won’t allow them to vote. This takes us back to prayer in order to be certain that we are being led by the Holy Spirit.

Lastly I submit that it is important to put this election in perspective with the Kingdom of God. How many times have you heard that this is the most important election in our nation’s history and that if we don’t get in the right person that it will be the end of America?

Given that 70% of our nation believes that we are headed in the wrong direction this is indeed an important election but let’s keep things in perspective. As Christians our citizenship is in heaven and our purpose here is to extend the Kingdom of God. Israel was being occupied by the Romans and ruled by corrupt leaders like Herod but we don’t see a lot of hand wringing by the writers of the New Testament about the state of the nation.

For millennia nations and empires have come and gone while the unshakeable Kingdom of God continued to grow. We may well be in the declining days of our nation. This is certainly not the country that the Greatest Generation fought to preserve. But even if that is so, our marching orders as Christians have not changed. We are to be living and proclaiming the Good News of the Kingdom. No matter who is president, Jesus is still King and that will never change.

We can have a mature optimism about our future. If God hears our prayers and heals our land then we will be a blest people. If our nation moves further away from God and grows even darker, then the light of Christ will be even more obvious and more people will be drawn to Him. Jesus promised that He will build His Church and the gates of hell will not be able to prevail against it. If you are with Him, then you are already on the winning side.