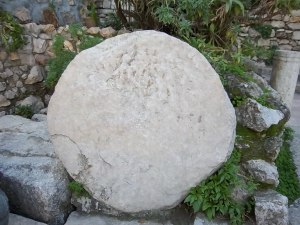 Let me begin this sermon by offering an explanation of tonight’s service. Given that this is normally a 5pm Saturday Mass, it places us in a liturgical no man’s land. It is really too early in the evening to have an Easter celebration and it is even too early to do an Easter Vigil because both of those are to be done either after dark on Saturday or very early on Sunday morning. Of course we could change the hour but I have never found that to be too successful. Folks will still show up at 5 or not come at all.

But this liturgical bind is really a blessing. I say that because it allows us to recognize Holy Saturday for what it is rather than pole vaulting over it from Good Friday to Easter. Over time the Easter Vigil has all but replaced Holy Saturday but it is a more ancient custom to allow this day to stand on its own. It is a day to focus on Christ in the tomb, resting from His labors and it is an invitation for us to also enter into His Sabbath rest.

As we meditate on this day’s events it also brings into focus the statement in the Apostles’ Creed that Christ descended into hell. That line is not without its controversy, and some have even refused to say it, but the church catholic has continued to confess it for scores of centuries because it is a truth that touches upon our salvation.

First let me clarify the term. When the Fathers spoke of “hell” they were not speaking of Dante’s inferno or the fiery pit into which the evil one is cast. They used the word “hell” as a synonym for what the Hebrews called “Sheol” or the Greeks called “Hades.” It is simply the place of the dead. It is not a place of torment like we think of hell today, rather it is the Greyhound Bus Station for the soul. Perhaps I need to find a better illustration because that really does sound like hell, doesn’t it? Anyway, modern versions of the Apostles’ Creed avoid this mix up by simply stating “He descended to the dead.”

1Peter 3:19–20: (Jesus) “went and made proclamation to the imprisoned spirits—to those who were disobedient long ago when God waited patiently in the days of Noah while the ark was being built. In it only a few people, eight in all, were saved through water….” Add to that 1 Peter 4:6: “For this reason the gospel was preached also to those who are dead, that they might be judged according to men in the flesh, but live according to God in the spirit.”

The Church Fathers interpreted these verses to mean that Jesus went to preach to all those who had died before Him and particularly to take from Sheol the Old Testament saints like Abraham and David and countless others.

Listen to another passage. Ephesians 4:7-10 NIV: “But to each one of us grace has been given as Christ apportioned it. This is why it (Scripture) says, ‘When he ascended on high, he took many captives and gave gifts to his people.(What does ‘he ascended’ mean except that he also descended to the lower, earthly regions? He who descended is the very one who ascended higher than all the heavens, in order to fill the whole universe.” The Greek word for “lower regions” is similar to the Greek word used for “hell” in the Creed.

Add to those the passage from the Revelation where the ascended Jesus says to John, “Fear not, I am the first and the last, and the living one. I died and behold I am alive forever more, and I have the keys of Death and Hades.

What begins to come into focus is what has been called “the harrowing of hell.” This is where Jesus enters the place of the dead and takes captive the captives. Over the centuries wonderful artwork and iconography have been done on this topic. They depict the doors of hell being blown off of their hinges and Jesus coming through the doors with the cross or the keys in one hand and the hand of Adam and Eve in the other. Behind them is a train of others. The harrowing of hell is not a form of universal salvation where everyone is taken out of hell. Rather it is emptying death’s prison of all those redeemed by Christ.

Some in the Reformation and some today object that Christ could not be in Sheol today because He said to the thief on the cross,“Today you will be with me in Paradise.” But to assume that Jesus meant a 24 hour period is to forget that when we leave this life we enter the eternal “today.” We move outside of time where to the Lord a day is as a thousand years and a thousand years is as a day ( 1 Peter 3:8, Psalm 90:4). Thus Christ was in hell today and the thief was with the Lord in paradise today.

So if the statement in the Creed is indeed correct, and I hope that we believe that it is, then why does it really matter in the end. We know that Jesus died and that He was raised, so why should it matter where He went in between? I suggest to you that it matters for several reasons.

The first reason is that it has to do with His incarnation. Some of the earliest heresies of the Church got it wrong about Jesus’ incarnation. They had Jesus put on humanity like an actor puts on a mask or like the Roman gods who would pop in and out by taking human form. But Jesus is not God with a human mask. He is God in the flesh. “And the Word became flesh and dwelt among us.” He lived fully human, He died fully human, He was raised from the dead fully human and He ascended to the Father’s right hand fully human.

His incarnation was not a temporary manifestation, any more than our humanity is a temporary condition. Christ who was fully human, when He died, went to the place where all who died before Him also went. Why would He be exempt from this part of being human?

A second reason that it is important for Christ to have entered into hell is to preach to those in prison. It underscores the mercy of God that those who came before Christ received the Gospel from Him and given an opportunity to leave Sheol with Him. It gives new meaning to the ancient words of the Psalmist, “Whither shall I go from thy spirit? or whither shall I flee from thy presence? If I ascend up into heaven, thou art there: if I make my bed in hell, behold, thou art there. (Ps 139: 7,8). This paints a beautiful picture of Jesus as the Good Shepherd doing the ultimate to find His lost sheep. It encourages us to know that there is no depth that we can descend that the love of God cannot find us.

I had someone say to me, “Well if I heard Him in hell of course I would believe. Hell therefore should be empty.” This is a serious underestimate of the power of unbelief. Satan and his demons know that Jesus is the Christ but instead of bowing before Him they have chosen to tremble. People on earth saw Him raise a man from the dead still they refused to believe. Unbelief and pride are that formidable. I doubt that such hard hearts would be softened by death?

A third reason that it is important for Jesus to have descended into hell is because in doing so He defeated it. That is what is being portrayed in the Revelation with Jesus holding the keys to Death and Hades. Isaiah prophesied, “He will swallow up death forever and the Lord God will wipe away tears from all faces.” (Is 25:8). St. Paul quotes Hosea and celebrates in His letter to the Corinthians, “Death is swallowed in victory, O death where is your victory, O death, where is your sting?” ( I Cor 15:54,55).

Lastly Jesus’ descent to the dead, and victory over it, offers us something that is very, very important. We heard it in Jesus’ first words to John as He declared that He had the keys to Death and to Hades. He said to John, “Fear not.”
When my father was dying, he was very lucid. His body was failing but his mind did not. He had a very gentle passing over. At one point we were talking in the hospital and he said to me without bravado and with full conviction, “You know Ray I am not afraid to die.” And he was not. He knew in whom he had believed. For my father death was a defeated enemy and now it was simply a gate through which he passed into the larger life. Death could not hold him and that is why he did not fear it. It is also why we continue to pray for the departed. They are not in a state of death, they are in life and we pray for them to grow in the continual love and service of God. It is a way to stay connected. Jesus’ decent into death makes all this possible.

On Friday when Jesus said, “It is finished” and it was indeed finished. He drank the cup the Father had given Him to drink. On Saturday He entered His Sabbath rest and that has a direct impact upon us. The writer of Hebrews says, “So there remain a Sabbath rest for the people of God, for whoever has entered God’s rest has also rested from his works as God did from his.” (Heb 4:9,10).

The life we live as Christians is to be lived in the context of the Sabbath rest that Jesus gives us. We take off the burden of good works and we live in the context of grace. It doesn’t mean that there is not work for us to do. There is plenty for us to do as we work and pray for Christ’s kingdom to come on earth as it is in heaven. But the Sabbath rest means that we don’t work like our salvation depends on it, because it doesn’t. Christ has already accomplished that for us. We work from a point of peace, knowing that Christ has already won the victory. We work as His coworkers, knowing that He who began a good work in us will perfect it until the day of Christ Jesus. We work with the knowledge that He is with us always even to the end of the ages. We work not to fulfill a need in us, we work because our cup runneth over.