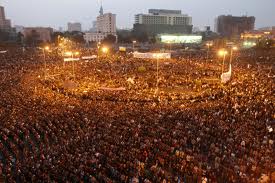 For those of you, like me, who have had difficulty understanding that is going on in Egypt I found this helpful. An Egyptian writes to explain what has happened there as if it happened here in the U.S.

From an Egyptian in Alexandria
“In a Nutshell…
A lot of my dear American friends still ask me what on earth really happened in Egypt, for their benefit, and anyone else on earth genuinely trying to make heads or tails of us “crazy Egyptians” ; here’s exactly what happened in Egypt over the past 12 months, but expressed in “American” terms…

There are no exaggerations or lies, these events all took place:
On June 30th 2012, democratically elected Barack Obama wins the election with 51.7%, takes the oath, and is sworn in as president of the United States.
First five months of his term go relatively smoothly, where he makes almost no decisions (except for some dubious presidential pardons to a dozen convicted terrorists, including some convicted for their part in the assassination of a former US President).
Suddenly, on November 21st 2012, president Obama issues a presidential decree giving himself sweeping powers, to the extent that his future decrees become un-contestable in any court, in effect his decisions henceforth are akin to the word of God.
His laws a new Bible…

Nationwide protests erupt as a result of this decree and 1.5 million people organize a sit-in at the White House to peacefully request he rescind it.
Some of Obama’s democratic party supporters attack the peaceful sit-in outside the White House with guns & shoot 5 peaceful protesters dead
A few weeks later president Obama dissolves the US Supreme Court and labels them all “traitors to America”

One short week later, he fires the United States District Attorney and personally appoints a Democrat to replace him.

A month later he annuls the US Constitution and forms a ‘constitutional committee’ to draft a new constitution (committee includes no Republicans or Independents, no Moslems or Jews, and only a handful of women.. And is composed primarily of Democrats & religious preachers)

In a referendum not supervised by any judicial branch, this constitution narrowly wins, and President Obama ratifies it the very next morning (despite it having only gotten the approval of 18% of all Americans).

Within a month he invites top global terrorists, known jihadists and Al Qaeda members from all over the world, to a rally in Yankee stadium, where he cuts ties with and declares war on, Canada.

Throughout this whole time, the US economy is sinking, the stock market collapsing, foreign investment has all but stopped, tourism has died, and electricity, fuel, and water shortages are a daily occurrence.

Unemployment has almost doubled, and the US$ dollar has lost 20% of its value globally.

Oh, and president Obama also outlines his new plans to lease the entire Silicon Valley area to China for 50 years (with full administrative control)…
Democratically elected president Barack Obama has done all the above in his FIRST YEAR IN OFFICE!!!

Ultimately, on June 30th, 2013…
110 million Americans take to the streets in 50 States peacefully and politely demanding -for 4 straight days- that democratically elected Obama leave immediately, and not continue his remaining 3 years….

That’s it in a nutshell
Who would you say had “legitimacy” in this case if it had been America?
“Democratically elected Barrack Obama”, or the 110 million Americans who fired him … ?”

3 thoughts on “What is going on in Egypt?”