While ye have light, believe in the light, that ye may be the children of light – John 12:36 King James Version

Modern translations, such as the English Standard Version and the New Living Translation have replaced the word “believe” with the word “trust” which more accurately depicts Jesus’ call to us.

When I was in high school a Baptist minister came to our house and in a private conversation he asked me if I believed that Jesus was the Son of God. The question was startling because to me that was as undeniably factual as George Washington being the first American President. But because the minister did not ask any follow up questions, the belief that I confessed only remained in the arena of historical fact. At that point in my life the fact that Jesus was the Son of God had very little impact. I was trying to live my life and figure it out on my own. If he had asked me if I was entrusting my life to Christ, I would not have been so quick to answer.

This is my favorite illustration about the difference between belief and trust. You are standing on a cliff overlooking a thousand feet deep gorge. A professional tightrope walker puts a wheelbarrow in front of him and walks on a tightrope across the gorge, turns around and comes back. He then asks, “Do you believe that I can walk across this gorge pushing a wheel barrow?” And because you just witnessed him doing it, you say “Yes.” Then he says, “Get in the wheel barrow.”

Being a follower of Christ is more than just having right belief. Jesus’ call is to acknowledge Him as the Light but it is more than that. He is calling us also to walk in the Light, to trust in Him, to get in the wheelbarrow. 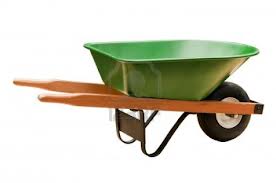